Surprised by Awe, or, the Lion, the Fish, and the Wonder

"When he shakes his mane, we shall have spring again," goes the rhyme about Aslan, the Christ figure in The Lion, the Witch, and the Wardrobe. The other bit of doggerel on my mind today is the old one about the month of March: "In like a lion, out like a lamb." As I write this March 19th, the ground is slushy and a cold rain is falling. To my knowledge, C.S. Lewis never experienced March in Connecticut, but if he had, perhaps he might have rethought Aslan's persona.

Lamb is indeed what I'm waiting for: not only a warm end to March, but also the lamb of Easter, which falls this year on March 31st. "At the Lamb's high feast we sing," and although Episcopalians are not nearly as strict about our fasting as, say, Orthodox Christians, and do not necessarily avoid meat in Lent, it feels odd to me to eat lamb during this time. This scruple echoes something that happened to me about fifteen years ago, when Diner #1 and I were visiting relatives in a remote area of Norway.

The idea came up of going fishing; one of the relatives, who knew where the fish were, steered the boat bearing Diner #1 and me into the fjord and began eyeing points on the horizon. When he was satisfied that we were in the right place, he dropped the jig, which jerked violently over and over again. He pulled the jig back up. On it were glistening pollock, some of them as much as two feet long. As he took the pollock off the jig, cut their throats, and tossed them into the boat, they flapped and slid about. I watched as the life in their eyes ebbed away; my white sneakers got spattered with blood.

Back at the house, Diner #1's grandmother prepped most of the fish for the freezer (a process which took her several hours, but she refused help) and fried the rest for dinner. She called us to the table, laden with the traditional accompaniments: boiled potatoes, crispy fried onions, cucumber salad, and melted butter, along with a huge platter of fish. As I took my place and looked again at the fish, a weird feeling came over me, something I could not quite name. Diner #1's grandmother offered me, the guest, the platter first, and as I took it, I felt my hands shaking and realized that I was scared out of my mind.

I had grown up praying before meals, but had never thought much about it; at that moment I suddenly understood why people do say such prayers, and why there are some cultures---Orthodox Judaism, for example---in which the slaughtering of animals is set aside as a holy calling. It came from times when awe of the Presence, whether in slaughtering a fish or a larger beast, was part of everyday life. The prayer was a response to the awe. I was scared because in the fish whose lives we took, into whose eyes I had gazed as they died, I had encountered something much, much bigger than myself. And so, yes, as I sat terrified before a platter of fillets, I muttered something silent and quick. The fear passed and I was able to eat.

I wish I could know such gratitude every day. Thinking of this on a snowy weekday here in Connecticut, when it seemed as if the high feast would never get here, I was inspired to plan a dinner not of lamb or pollock, but of red snapper, prepared as the Greeks do, with vegetables and aromatics sauteed in olive oil. Below is a picture of the fish in question just before it was popped into the oven. The vegetable sauce provides leftovers; thinned with a little broth or water, it makes a lovely soup the next day. Capping the menu is a dessert of (what else) fruit. The Diners and I left the table happy, as if warmed by the sun.

At the fish market, look for a red snapper with bright, clear eyes. Once you have chosen your fish, ask the fishmonger to scale and clean it, but to leave the head and tail on. Refrigerate until ready to cook.

Heat in a large skillet:

1 large leek, chopped
2 onions, chopped
As much garlic as you like, minced

Add and saute until vegetables are soft:

and cook for about 15 minutes. Spread this sauce in a large roasting pan. Take the fish out of the fridge and "make it swim again" by rinsing thoroughly in cold water. Dry on paper towels and rub inside and out with:

Lay the fish atop the sauce and decorate with

Butter a sheet of parchment and lay atop the fish, buttered side down. Bake at 400 degrees until the fish is flaky; mine, which was comparatively small at 1.5 pounds, took about 30 minutes. 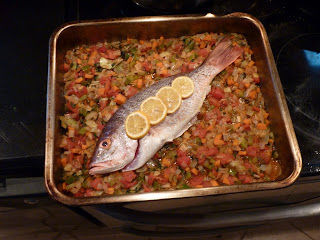