The Time of My Life with "Foods of the World"

I met the great love of my reading life innocuously enough, through a piece of junk mail. Time-Life Books knew to target our household because we had bought from them in the past (the "World War Two" series fascinated my brother and me; we turned to it on rainy days and were never disappointed). I had seen the Foods of the World series before in the library, but the possibility of owning all 27 volumes had not occurred to me until this well-timed and colorful piece of marketing showed up. I was thirteen years old and had recently moved from the Midwest to Brighton, a suburb of Rochester, New York. I didn't know what I wanted out of life yet, but I loved to cook, and I loved foreign languages. Yes, I thought, looking at Time-Life's glossy pitch. Yes, this is for me.

The volumes, with their matching spiral-bound recipe books, came one at a time, every other month or so, in a sturdy cardboard envelope. The first to arrive was "The Cooking of India." Soon I was seeking out fresh coriander for chutney (this was 1983, and Wegmans, bless its expansive heart, was the only store in Rochester carrying fresh coriander in sufficient quantities), measuring spices for curried shrimp, making homemade cheese for mattar paneer (the dish by which I judge Indian restaurants today) and devising a mean homemade garam masala. Something in me changed because of that book. Cooking had become more than a pleasant pastime; it was now a way of connecting myself to other people.

When I had received perhaps six or seven such books, disaster struck: Time-Life put the series out of print. It was, they said, far too expensive to continue producing a full-color 27-volume set of cookbooks with accompanying recipe books. (These are the same people who encouraged me to cook with real saffron, to use copper pots, to assess different grades of caviar.) That meant that I would have to seek out the rest of the set in used bookstores. Hunting them down would prove to be an especially keen pleasure. Over the next few years, I assembled the complete set, and now it has pride of place on my cookbook shelves. 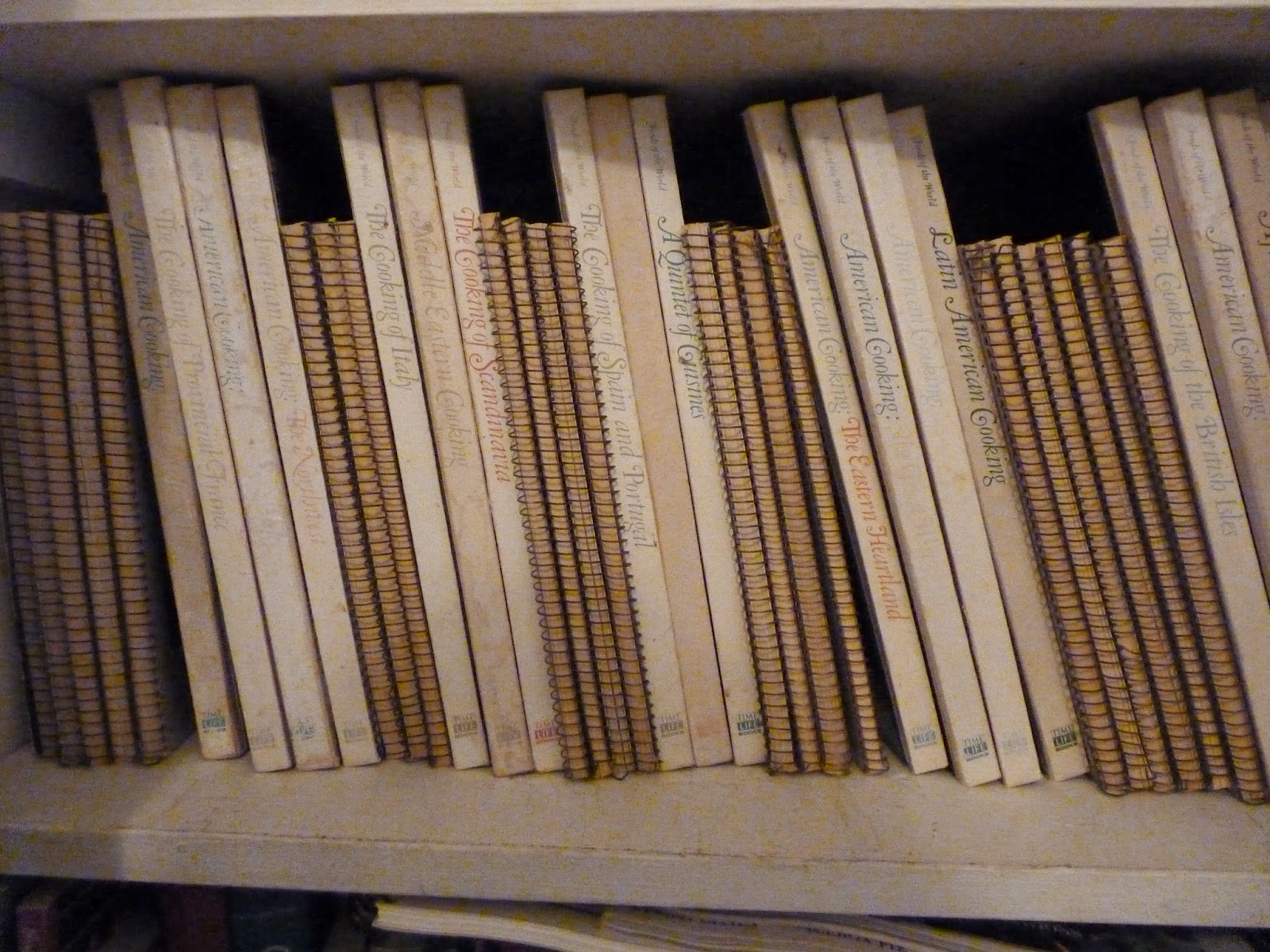 This love of mine has a touch of the irrational to it. The series has many virtues, but it also has definite faults. There are eight volumes on American cooking, two on French, one on Italian and one on Chinese cooking, which in retrospect looks terribly ignorant. Greece is confined to one chapter in the book on Middle Eastern cooking. Korea is left out completely. On the other hand, the authors were among the great food writers of the 20th century: M.F.K. Fisher, Craig Claiborne, and Joseph Wechsberg, to name a few.

The series began to be issued in 1968 and was completed in 1973, and it shows. Although the world was on fire, the tone of the books is often relentlessly perky, as if the Time-Life printing presses had been operating to the tune of "It's a Small World After All." "One hopes that the war there will be over soon," chirps the author of the Vietnam chapter before moving on to the weightier matters of spring rolls and cucumber salad.

This retro optimism has its charms. Whenever I see one of the volumes, or even the whole set, for sale, I feel a surge of interest all over again. I have had dreams about browsing used bookstores and finding more volumes with titles like The Cooking of Nova Scotia or Burmese Cooking or The Cooking of the Arctic Peoples. Time-Life is no longer in the book-publishing business, but hope springs eternal. I wonder how many other foodie readers are out there, waiting for the moment when the good people at Time-Life come to their senses and publish an updated edition of the greatest cookbook series in history. On the other hand, the world seems even less innocent now than it was in 1968. Who today would be up to the task, so confidently tackled by the Foods of the World editorial team, of finding global peace in a cookbook series? Perhaps there really is nothing like first love.

Posted by Anna Bendiksen at 4:00 PM

Email ThisBlogThis!Share to TwitterShare to FacebookShare to Pinterest
Labels: cookbooks